The Rockcastle Pro Am 3 Gun Championship is the “Next Level” of multi-gun competition, with the largest field of competitors in the sport, and two epic prize tables. The Pro Am is basically two competitions going on at the same time. In 2016, more than 480 shooters competed! More than 200 Pro shooters will compete over two and one half days running 8 challenging, technical, and fun stages designed by former and current 3 Gun Champions. More than 200 Amateurs will compete for two days on a separate course of 7 stages also designed by the 3 Gun greats, tailored especially for amateur and celebrity competitors. Each division will have its own prize table. Pro prize table = decending order of finish, Am prize table = random draw. – READ MORE 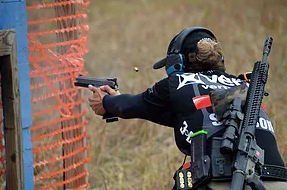 FACILITY:
The Rockcastle Shooting Center is a 2000 acre shooting resort located in Park City, Kentucky.  Rockcastle features a mix of over 20 shooting ranges that include, long range, rifle and pistol bays, sporting clays, 3D archery, and almost any other trigger pulling your imagination can create.  There is a 100 room hotel on-site, along with The Lookout Restaurant, The Cave Valley WInery (Home of Winchester WInes), and the 18-hole Cave Valley Golf Club.  Bring your guns, bring your clubs, your adventure begins here! – READ MORE

The Rockcastle Pro Am 3 Gun Championship Match Director position has been filled by our good friend Mike Sexton, and we are excited to see what Mike will bring to the match.

Linda Chico will be doing her magic as Chief Statistician, and handling all registration, squadding, and scoring.